On This Day in Pink History 10th June 2002, Just Like A Pill was released

Just Like A Pill was written and produced by Dallas Austin and Pink for her second studio album, Missundaztood. In June 2002, it was released as the third single from the album with great commercial success, peaking at number 8 on the Billboard Hot 100 in America. Just Like A pill became her first number one single in the UK, and reached the top 10 in many countries including Ireland, France and Sweden. Although the song was only released as a radio only single in Australia (a physical release was never eventuated), it was a number 1 radio hit. In late June 2009, the song charted at number 97 on downloads, mostly likely due to Pink’s Funhouse Tour.

The song was generally well received by contemporary music critics. NME called it “the third best track off her killer last album”.Drowned In Sound’s Robert Luckett commented that it is “a fascinating record…this is a record with a edge, a kind of pot boiling over at any moment, ready to go off at any time vibe.” He also wrote “it obeys the pop industry’s well-dusted rules for a hit.”Stylus Magazine’s Todd Burns, in his review of the album, compared “Just Like a Pill” to the other singles from the album, “Don’t Let Me Get Me” and “Get the Party Started”, writing “The guitars… sound much more integrated into the work and the overall song works far better.”

The video for “Just Like a Pill” was directed by Francis Lawrence for LaFace Records. The video for the song is considerably different from Pink’s previous videos. “Get the Party Started” and “Don’t Let Me Get Me” were lighter in nature than the dark atmosphere which is reflected in the video for “Just like a Pill”, an example of which is the fact that Pink can be seen throughout the whole video wearing black outfits with naked arms and legs and wearing black hair. In the first scene, Pink lies on the floor. In the chorus she sings in front of her band. She is also featured in another scene with white rabbits around her in a room, and in another scene, she is seen with an elephant. There are also scenes with Pink singing in front of and amongst various people. In the latter half of the video, she runs in a hall whilst lip-synching the song, before disappearing into a bright doorway atop a staircase at the conclusion of the video.

In the video, Pink is seen sitting in front of an elephant. After the elephant had been on the set, she saw the abuse and captivity the animal was in. “Pink learned about the abuse of captive elephants when a trainer brought one onto the set of her ‘Just Like a Pill’ video. She could see that something was wrong and she called us to learn more about the issue. Now, Pink would like to see circuses pack their trunks”, according to PETA spokesman Dan Mathews.

In an interview with VH1, Pink said “This poor elephant…a huge elephant, it’s so cute, and I could see how painful it was for it to get down on its hands and knees, and I’m like, ‘Can we not do this anymore? I think we got the take, you know, it’s enough. The elephant has had enough.’ And the trainer’s like, ‘Oh, he loves it.’ And so I was like, ‘So when were you an elephant?’… I didn’t like it. I won’t do that again. … No more animals.” When talking about the different style of video, Pink said “This one’s very dark and artsy, and I have black hair, which is very fun. I loved it. It’s another part that I haven’t concentrated on before.”

The song is almost always included in setlists of performances and tours.

On This Day in Pink History… 20th February 2003, Pink attended the Brit Awards

In 2003, Pink attended the Brit Awards and performed a medley, Get The Party Started & Just Like A Pill. She also won the award for Best International Female Artist. 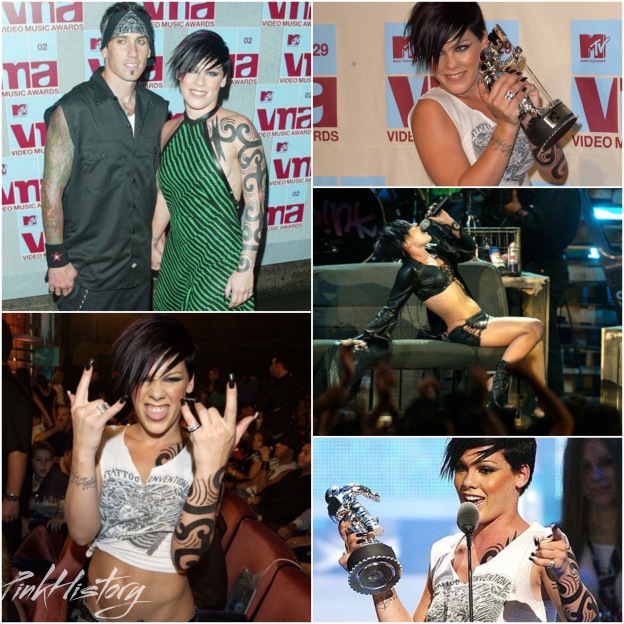 In August 2002, Pink attended the MTV Video Music Awards. She performed Just Like A Pill and won awards for Best Dance Video and Best Female Video for Get The Party Started She was also nominated for Best Pop Video but lost out to No Doubt’s Hey Baby.