On This Day in #PinkHistory… 5th October 2019, Pink played at Rock in Rio on the Beautiful Trauma Tour

On This Day in Pink History… 27th September 2006, The I’m Not Dead (arena) Tour started

On 27th September 2006, Pink played in Zurich, Switzerland, which kicked off the beginning of the I’m Not Dead arena Tour.

The tour supported Pink’s fourth studio album, I’m Not Dead, and she played in Europe and Australia, while also opening for Justin Timberlake in USA in January 2007.

However, this was not the start of the I’m Not Dead tour, as Pink had played a club tour in USA in summer 2006. Following the Australian arena tour (2007), Pink then returned to Europe to play smaller venues and festivals. South Africa and Asia was also included in the 2007 tour.

This Pink History article will focus on the arena tour throughout Europe and Australia, as well as the opening of Justin Timberlake’s FutureSex/LoveShow Tour.

The show was recorded in December from London’s Wembley Arena for a live DVD which was released in 2007. The performances of Lady Marmalade and Redemption Song are not on the DVD. The DVD contained bonus features including: On Tour With Pink, Photo Gallery & Audio Tracks (Crash & Burn and U + Ur Hand Bimbo Jones remix).

The tour produced two music videos; Dear Mr President was a video of the live performance of the song, and Leave Me Alone (I’m Lonely) was a music video containing clips from the tour.

On This Day in Pink History… 22nd September 2012, Pink performed at the iHeart Festival

In 2013, Pink took the Truth About Love Tour to Australia and played a total of 46 shows in the country. 18 of those shows were at Melbourne’s Rod Laver Arena. She is also the first artist to sell more than 250,000 tickets at the venue. 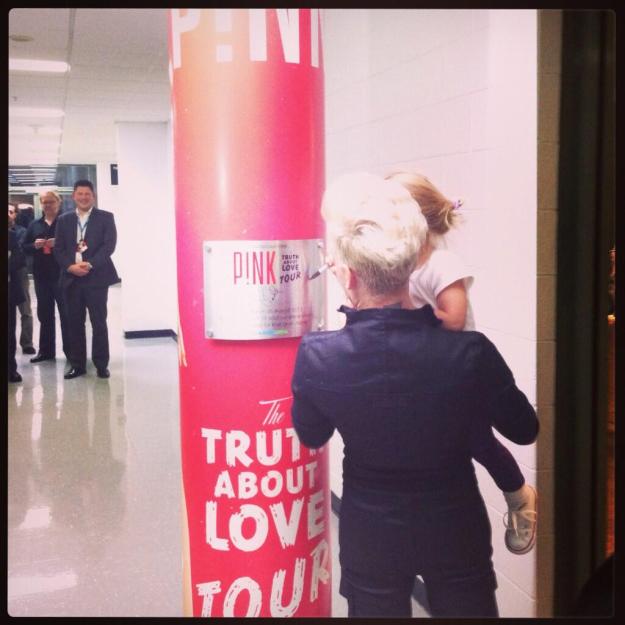 On This Day in Pink History… 2nd August 2009, Pink played at the Rod Laver Arena in Melbourne, Australia, and broke the record for the most shows played at the venue by one artist on one tour

In 2009, Pink was on the road with the Funhouse tour and the tour hit Australia from May to August 2009. During that time, Pink performed at Melbourne’s Rod Laver Arena on seventeen nights with ticket sales topping $17.2 million ($21.7 Australian). The combined attendance for all shows at the Melbourne venue was 214,956.

On This Day in Pink History… 22nd July 2004, Pink played at Golden Stag Festival in Romania

Don’t Let Me Get Me

God is a DJ

Get The Party Started

On This Day in Pink History… 29th June 2002, Pink played at the Wiltern Theatre in Los Angeles on the Party Tour

Setlist:
Get the Party Started
Missundaztood
18 Wheeler
What’s Up?
Dear Diary
Respect
Medley: I Love You / You’re All I Need to Get By
Janie’s Got a Gun
You Make Me Sick
Just like a Pill
Lonely Girl
Sweet Child o’ Mine
Numb
Janis Joplin Medley: Summertime/Piece of My Heart/Me and Bobby McGee
Family Portrait
My Vietnam
Encore:
Eventually
There You Go
Don’t Let Me Get Me

On This Day in Pink History… 13th June 2010, Pink played at the Isle of Wight Festival on the Summer Carnival Tour

Medley: My Generation/Basketcase (with Butch Walker)

On This Day in #PinkHistory 7th December 2013 @Pink attended Cyndi Lauper’s At Home for the Holidays event in New York Check out www.PinkHistory.blog for more!