On This Day in Pink History… 29th May 2010, The Summer Carnival Tour started 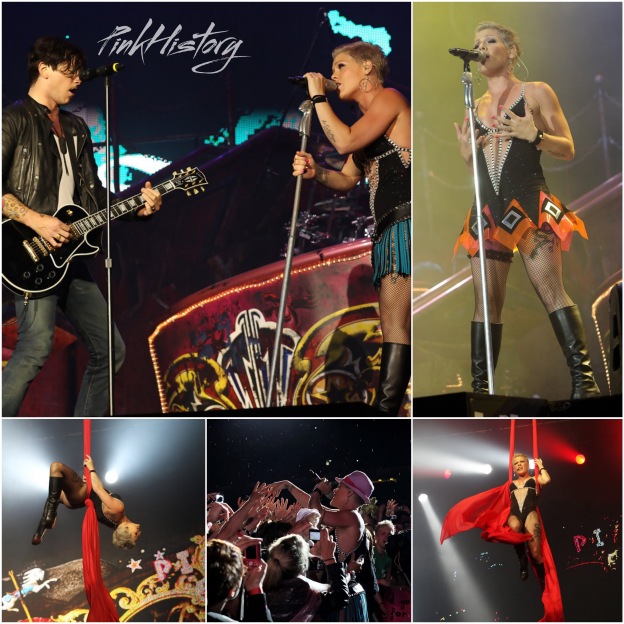 In October 2009, Pink’s fifth tour, The Funhouse Summer Carnival Tour, was announced by tour promoter, Eventim. This was Pink’s first ever headlining stadium tour, and took place in Europe. The tour was different from her previous tour (Funhouse Tour), with a new setlist and less acrobatics.

For the tour, 3 music videos were filmed which were shown throughout the show. The new videos for Please Don’t Leave Me, Funhouse and Leave Me Alone (I’m Lonely) were also included in the Greatest Hits… So Far! album released in 2010.

Pink had a number of support acts on this tour playing at different venues across Europe, some of these included VV Brown, Gossip, The Ting Tings, Paolo Nutini and Butch Walker and the Black Widows. Pink has been working with Butch Walker since her fourth album, I’m Not Dead, and Butch played some of his own shows in Europe throughout the time he was on tour with Pink. He also appeared back on stage during Pink’s show to perform a few duets.

The setlist was more or less the same at each venue, with a few changes. For example, Whataya Want From Me was performed until the Sunderland date, where it was replaced by What’s Up (originally by 4 Non Blondes). During a show in Germany, Pink performed I Don’t Believe You and Dear Mr President which were then a permanent addition to the setlist.

At the show in Nuremberg, Pink was not attached to her harness correctly during the performance of So What and fell, landing in the barricade. The show was immediately stopped, but Pink later tweeted that she had no broken bones and no serious injuries. No shows were cancelled because of this accident, and Pink performed the stunt for So What 4 days later in Prague.

There were 34 shows in total across Europe, including festivals.

Text by @troublepink, info from WikipediaEURO STADIUMS WILL BE ROCKING OUT TO P!NK IN JUNE AND JULY

Last weekendP!nk kicked off her explosive Funhouse Summer Carnival stadium tour in Cologne, Germany to a packed out stadium of 52,000 adoring fans!

As a giant cannon fired from the stage, Pink flew over the crowds bedecked in gold wings from a magic box hanging 100 feet above the stadium to perform the crowd-pleasing opener ‘Get the Party Started’ and wow did the girl deliver a show to remember!

In trueP!nk style she performed all the show stopping tunes and some new breathtaking stunts including rolling over the audience in a huge inflatable ball and flying across the stadium in a green sequined leotard for the finale of ‘So What’.

The set list featured new hits from Funhouse as well as classic hits ‘I’m Not Dead’, ‘Just Like A Pill’ and ‘U & Ur Hand’.

Fans were treated to a cover of The Who’s ‘My Generation’ and Green Day’s ‘Basket Case’ with support Butch Walker taking to the stage to perform the medley with P!nk.

Brace yourself for a treat if you are one of the lucky fans with tickets to The Funhouse Summer Carnival Tour!