On This Day in Pink History… 6th October 2010, Raise Your Glass was released 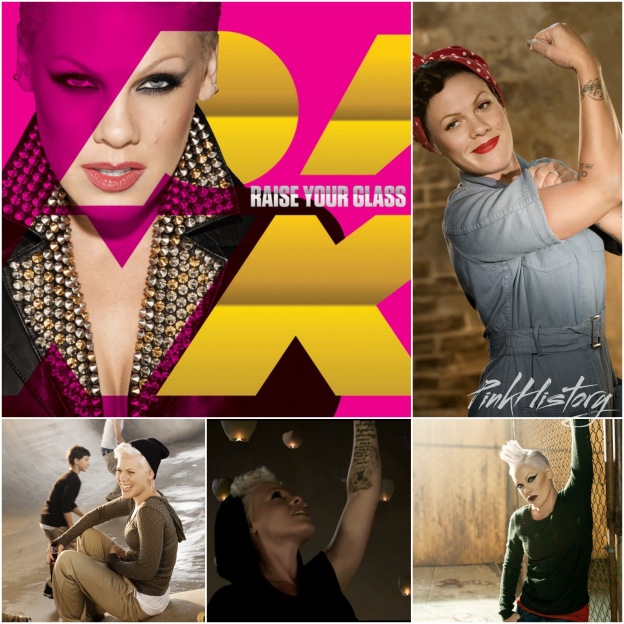 In 2010, Pink announced that she was going to release her first compilation album, The Greatest Hits… So Far! to celebrate a decade since her debut release. The lead single for the album was Raise Your Glass. Written by Pink, Max Martin and Shellback, the single was released by LaFace Records and RCA Records.

Pink describes the song as a “celebration for people who feel left out from the popular crowd.”In an interview for MTV, Pink comments on the song: “I don’t know if it’s going to be huge, but it is new. I did three new songs. It was good timing. I had been on the road for two years and I hadn’t written anything and I wanted to write a song about underdogs. Instead of going and becoming a cover girl, I kind of just hit the road and pounded the pavement…and became a touring artist. You don’t have to be popular when you’re a touring artist, you just have to be good, and this is a thank you for the fans.”

In the United States, “Raise Your Glass” recharged Pink’s chart performance, becoming her tenth Top 10 hit and her third number one hit. It put Pink third on the list of female artists with most Top 10 hits in the 2000s, behind Rihanna, who has collected 18 Top 10 hits since 2005 and Beyoncé, with 14. It took the song eight weeks to hit the Hot 100’s apex, where it stayed for a single week. “Raise Your Glass” has also become Pink’s fifth number one on Adult Pop Songs, giving her the most number ones on the chart of a female artist, and putting her in a tie with the band Nickelback for the most number ones on the chart out of all artists; in 2011, Katy Perry achieved her sixth no.1 in the chart, placing Pink and Nickelback at number two as artists with the most number ones. “So What,” Pink’s only previous 3-million seller, reached that level in 26 weeks. As of August 2013, the single has sold 4,162,000 copies.

“Raise Your Glass” reached #13 in the United Kingdom. However, in Australia, “Raise Your Glass” climbed to the top of the ARIA singles chart in 24 hours, it also debuted atop the Polish charts and German airplay charts, just like Pink’s six previous singles. Therefore, Pink breaks the record she had set herself, as the artist with most consecutive number one singles on the chart. In New Zealand, the song peaked at number five on the RIANZ on the singles chart and reached number one on the radio airplay chart.

The music video was Pink’s 12th collaboration with Dave Meyers. The song is also the opening performance on Pink’s 2013/14 Truth About Love Tour.